Due to COVID-19, some offers may no longer be valid or temporarily suspended. Please verify the validity (even if it says "ON TODAY" below) before heading down
The greatest classic Fallout offer possible Fallout 1,2, and Tactics, Freespace 1&2, Castles 1&2, and other unforgettable Interplay games are going at 50% off for a limited period GOG P2D Past Event

The greatest classic Fallout offer possible Fallout 1,2, and Tactics, Freespace 1&2, Castles 1&2, and other unforgettable Interplay games are going at 50% off for a limited period at www.gog.com

When a conversation between gamers comes down to listing the absolutely essential PC classics one can’t simply imagine the gaming world without, inevitably Interplay games come up. Most PC gamers are dedicated Interplay fans, even if unknowingly.

Even if by some strange twist of life you don’t instantly recognize the label, it’s an easy bet that looking at our this week’s Immortal Interplay Classics promo page you’ll immediately notice at least two titles that will make you excited or nostalgic.

The number of unforgettable titles in Interplay’s offer here on GOG.com is simply astounding! Today, we bring you all of them with a 50% discount. Now, let’s take a moment to talk about Fallout, shall we?

When it was first released in 1997, Fallout electrified the gaming community and proved that real depth and freedom of real-life pen-and-paper RPGs weren’t that far out of reach of computer games as it was usually proclaimed. The post-nuclear wasteland became the number one destination for countless fans.

The game was enormous, masterfully written, and extremely immersive. Making it even better seemed impossible. But then, in 1998, Fallout 2 came along and proved that perfection could still be improved. Larger gameworld provided even more freedom, and the variety of enemies, items, NPC, quests, and stories made it immortal.

After all these years some people still stand by opinion that Fallout 2 is the best computer RPG ever created. Add Fallout Tactics on top of that, for those who think that the combat system was the best part of these games, and there you have it: the greatest classic Fallout offer possible!

But that’s not all! Head out to our Immortal Interplay Classics promo page and grab yourself some of the best games ever made for the PC, 50% off on GOG.com. Get the offer now at www.gog.com.

Burger King M’sia: Here are over 15 coupons you can flash to score some impressive deals till 20 June 2021 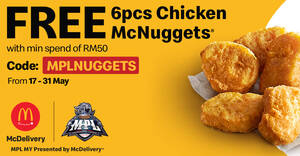 McDelivery M’sia: FREE 6pcs Chicken McNuggets whenever you spend a minimum of RM50 till 31 May 2021