Due to COVID-19, some offers may no longer be valid or temporarily suspended. Please verify the validity (even if it says "ON TODAY" below) before heading down
Own it all: 8 seasons, exclusive art book and a bonus disc of killer special features in a collectible slide box inspired by the one Dexter himself uses on the show to catalog his kills Amazon.com P1D Past Event

Own it all: 8 seasons, exclusive art book and a bonus disc of killer special features in a collectible slide box inspired by the one Dexter himself uses on the show to catalog his kills at Amazon’s 24-hour deal at www.amazon.com. 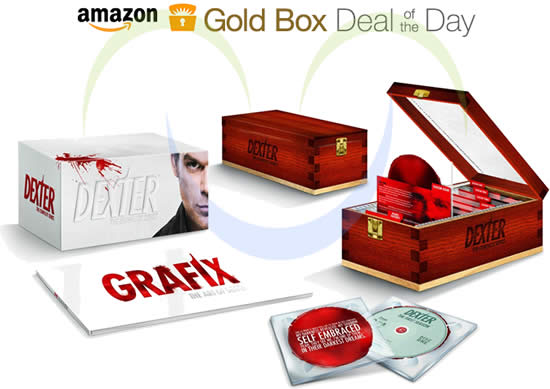 Join your favorite serial killer in all 8 chilling seasons of Showtime’s Emmy and Golden Globe-winning series. Blu-ray collection includes 25 discs, including all the episodes and the bonus disc!

Dexter is a crime drama about Dexter Morgan, a man who leads a double life as an incredibly likeable forensics expert for the Miami Police Department and as an emotionless vigilante serial killer.

Taught by his foster father to harness his lust for blood and killing, Dexter lives by his own strict moral code – he only kills murderers who can’t otherwise be brought to justice. Dexter is a killer who grapples with fitting into society while, at the same time, he struggles with his inability to feel emotion.

The irony of Dexter’s life is that he works closely as a blood splatter analyst with the very people who hunt his kind – the homicide departments.