Due to COVID-19, some offers may no longer be valid or temporarily suspended. Please verify the validity (even if it says "ON TODAY" below) before heading down
Black Friday 2015 is almost here, but Amazon didn't want you to wait until the day after Thanksgiving for Black Friday deals, so they have kicked off the savings a little early. Amazon.com P2W2D Past Event

Amazon has started their countdown to Black Friday deals and offers at www.amazon.com/blackfriday from 4 November through 20 November 2015. 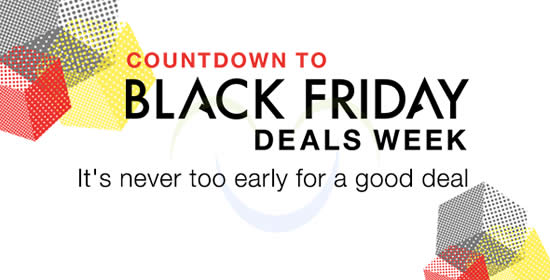 Black Friday 2015 is almost here, but Amazon didn’t want you to wait until the day after Thanksgiving for Black Friday deals, so they have kicked off the savings a little early.

They are counting down to the big day with even more deals, all day, every day. Stop by each day from 3pm at www.amazon.com/blackfriday through November 26 for early Black Friday deals, including sales on electronics, low prices on DVDs, magazine subscription specials, toy bargains, and fashionable deals for women, men, kids & baby, and more.

Something else to be excited about–at Amazon, Black Friday 2015 isn’t just a day to us–it’s a whole week! They’ll kick off Black Friday Deals Week early with Black Friday deals and sales all day, every day that week, including Black Friday, with those big after-Thanksgiving sales you’ve been waiting for.

Check www.amazon.com/blackfriday every day at 3pm to be among the first to discover the deals

Also check the Daily 24hr Gold Box Deals at www.amazon.com/gp/goldbox – Deals start at 3pm on the first day and end on 3pm on the next day after which a new Deal takes over.