Find out the differences between the new models and old models here. 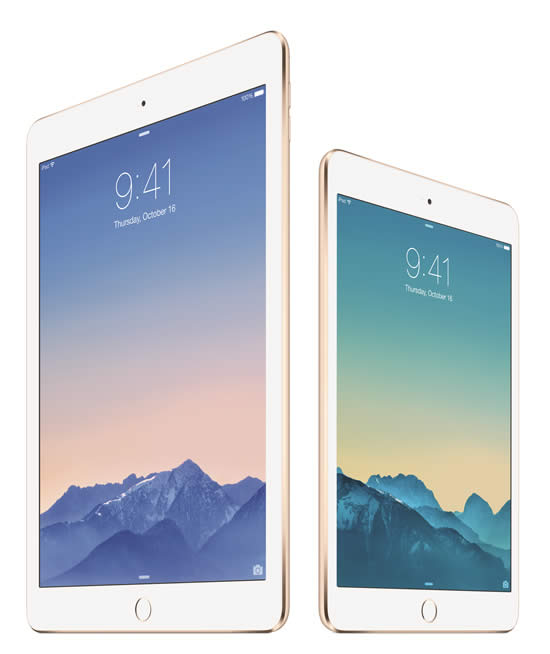 Available in gold, silver and space gray, the new iPad Air 2 and iPad mini 3 offer Touch ID so users can unlock their iPad with just the touch of a finger and make purchases easily and securely within apps using Apple Pay.¹

“iPad is a magical piece of glass that runs more than 675,000 apps specifically designed for it, and is thin and light enough that you can comfortably hold it all day; the new iPad Air 2 is packed with amazing new innovations, weighs less than a pound, and at just 6.1 mm is the thinnest tablet in the world,” said Philip Schiller, Apple’s senior vice president of Worldwide Marketing. “iPad Air 2 has a new Retina display with anti-reflective coating, second generation 64-bit A8X chip, all-new iSight and FaceTime HD cameras, faster Wi-Fi and LTE wireless, and includes the revolutionary Touch ID fingerprint identity sensor.”

Engineered for unmatched portability and ease of use, iPad Air 2 offers a beautiful, precision unibody enclosure of anodized aluminum for durability and a solid feel.

The improved Retina display features a fully-laminated design that brings images and content closer to the user’s fingertips, resulting in an even more personal and intimate experience. A custom-designed anti-reflective coating reduces glare by 56 percent² for a clearer display in the office, the classroom or outdoors. 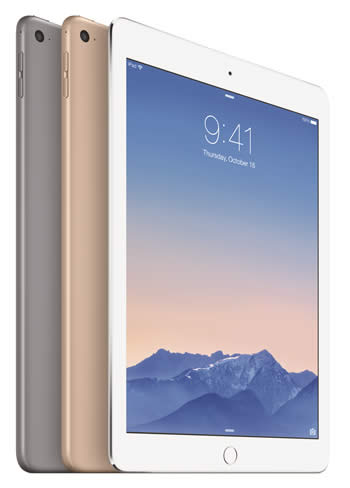 iPad Air 2 is powered by the new Apple-designed A8X chip, which delivers a 40 percent improvement in CPU performance and 2.5 times the graphics performance of iPad Air, and still delivers the up to 10-hour battery life³ users expect while working, playing games or surfing the web.

Innovations to the iSight and FaceTime HD cameras in iPad Air 2 enable better photos and videos, with an 8MP sensor and advanced optics in the iSight camera to help capture rich, detailed images and add new features including panoramic in Photos, time-lapse video, slo-mo and 1080p HD video.

The FaceTime HD camera now captures over 80 percent more light than iPad Air’s camera, and features burst mode as well as HDR stills and video. With thousands of powerful apps that take advantage of iPad’s amazing cameras and large Retina display viewfinder, iPad becomes a tool that can scan and annotate documents, help study the sky above and provide athletic performance analysis—all with just a tap.

iPad Air 2 delivers faster connectivity with 802.11ac Wi-Fi with Multiple-In-Multiple-Out (MIMO) technology for 2.8 times the Wi-Fi performance of iPad Air at data rates up to 866 Mbps.⁴ iPad Air 2 with Wi-Fi + Cellular integrates even more LTE bands and comes with expanded LTE for up to 50 percent faster cellular connections,⁵ plus support for other fast cellular technology around the world (DC-HSDPA, HSPA+). 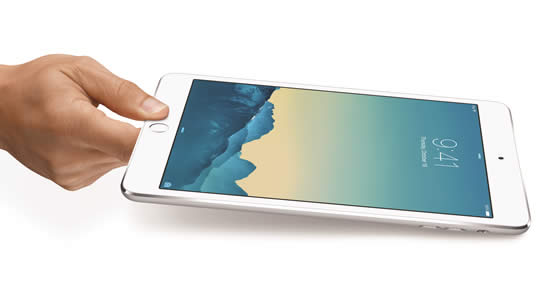 Touch ID gives iPad Air 2 and iPad mini 3 users a simple and secure way to unlock iPad with just the touch of a finger, plus the ability to authenticate within apps to better protect logins and data. Touch ID can be used as a secure way to approve purchases from the App Store, iTunes Store or iBooks Store, and with Apple Pay, when paying for physical goods and services within apps.

The new iPads come with iOS 8.1 including Continuity features across iOS 8 and OS X Yosemite that enable all your Apple products to work together seamlessly. Handoff lets you start an activity on one device and pass it to another, and when your iPhone is on the same Wi-Fi network, you can make and receive phone calls right from your iPad. 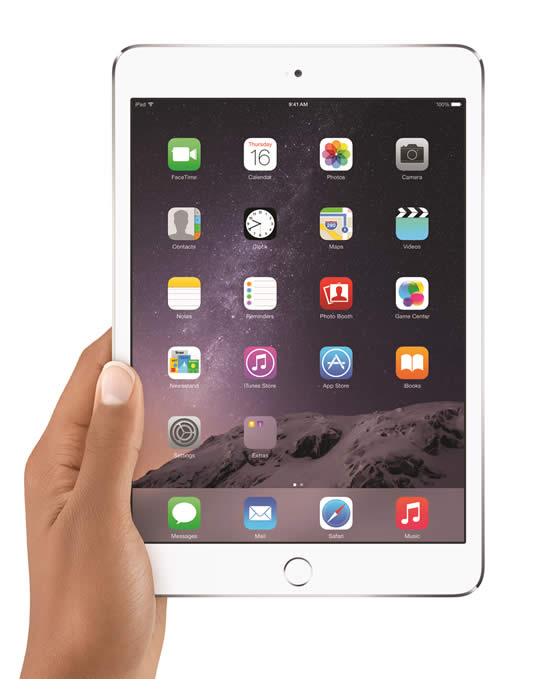 ¹ Apple Pay is only available in the US.
² Over the previous generation iPad Air.
³ Battery life depends on device settings, usage and other factors. Actual results may vary.
⁴ Based on theoretical speeds, actual speeds may vary.
⁵ LTE is available through select carriers. Network speeds are dependent on carrier networks. Check with your carrier for details. 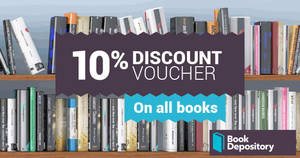 Get an extra 10% off already great prices