Due to COVID-19, some offers may no longer be valid or temporarily suspended. Please verify the validity (even if it says "ON TODAY" below) before heading down
Malaysia Airlines is offering exciting air fares through its Year End Special (YES) from 25 November 2013 to 2 December 2013 for the travel period from 28 November 2013 till 30 June 2014. Malaysia Airlines P1W Past Event

This is a great opportunity for travellers to start planning in advance for their 2014 holidays and business travels as the Malaysia Airlines Year End Sale will be offering economy class airfares discounted up to 50% off current market fares for various domestic and international travels. Likewise business class fares will be discounted up to 60% for domestic and international. 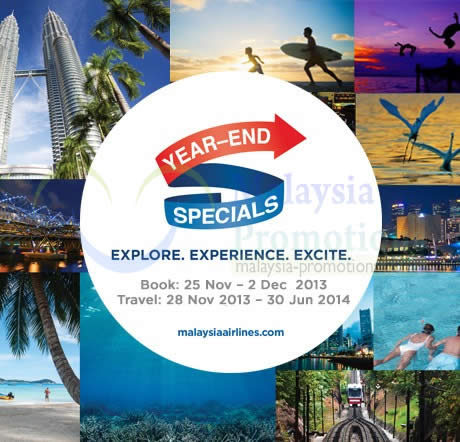 Customers who grab this offer now will only have to pay a fare starting from RM2979 for a return economy class ticket to London from Kuala Lumpur on Malaysia Airlines’ flagship A380 aircraft which is designed for comfort in mind. The business class return fare for the same is up for grabs from RM11,449.

The national carrier also has value deals to the Indian sub-continent and the Middle East. Customers can choose to fly economy class to Bangalore at fares from RM1129 and to Dubai for an attractive fare starting from only RM1799. Business class fares to Bangalore starts from RM2249 and to Dubai, fares are up for grabs from RM6099.

On the home-front, flying out from Kuala Lumpur to Kuantan, Johor Bahru, Alor Setar, Kuala Terrenganu or Kota Bahru on economy class is possible at affordable fares starting from RM170. The same on business class will cost starting from RM629.

Malaysia Airlines encourages those travelling during the school holidays season to perform self-check in to avoid long queues at the airport. Passengers may choose to check in via web (malaysiaairlines.com), mobile (flymas.mobi) or fast-check kiosks (at KLIA). Malaysia Airlines web check-in is open 48 hours and up to 90 minutes before departure.

The web check-in is however not applicable for travel on sectors Kuala Lumpur to Bandar Seri Begawan, Kunming, Xiamen, Kathmandu, Los Angeles, Tokyo–Los Angeles, as well as sectors and code share fights operated by partner carriers.